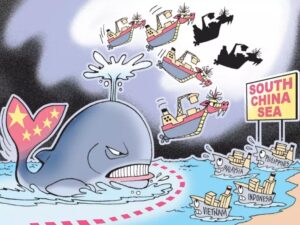 BANGKOK – As an emerging power, China faces a number of challenges that it must contend with both domestically and internationally. As the US becomes increasingly wary of China’s growing prowess, island building in the South China Sea and muscle-flexing along the de facto Indian border, a showdown of military budgets has followed. This has seen China step up its spending in line with its economy and ambition and the US struggle to do more with less.

In recent weeks, China has ramped up military drills and energy exploitation in contested waterway as the US military remains bogged down in the virus crisis at home. China sees the COVID-19 pandemic as a rare opportunity to advance its territorial interests. The United States State Department has called on China to “stop exploiting the distraction or vulnerability of other states to expand its unlawful claims in the South China Sea.”

Since the second week of May, the website of the People’s Liberation Army (PLA) has posted stories on large-scale naval exercises and the sinking of a Vietnamese fishing boat. In addition, it also announced the ramping up of military industries in Wuhan, the original epicenter of the Covid-19 pandemic. According to the PLA’s website, “the outbreak of Covid-19 has significantly lowered the US Navy’s warship deployment capability in the Asia-Pacific region.”

In recent days, China has conducted military drills and deployed large-scale military assets to the maritime area while at the same time officially celebrating strides made in exploiting disputed energy resources in the fossil fuel-rich sea. On May 24, the Chinese survey ship Haiyang Dizhi 9, traversed Vietnam’s Exclusive Economic Zone (EEZ) on its way to survey an area of seabed claimed by both Vietnam and Malaysia. In addition, China’s first aircraft carrier and its Type 901 support ship were confirmed to have taken part in a naval drill in the Miyako Strait, the Bashi Channel south of Taiwan, and in the South China Sea.

“Training for war preparedness will not be stopped even in the middle of the Covid-19 epidemic, and the training of carrier-based fighter pilots must continue,” announced the PLA Daily on June 28. The Covid-19 pandemic and its consequences are set to deliver a major blow to Chinese land and maritime plans. On land, lockdowns and upcoming recessions have led Belt and Road Initiative (BRI) transport infrastructure projects to increase costs for some participating economies. 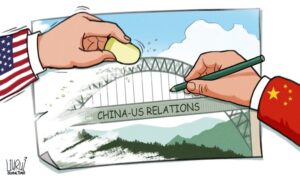 In May, two US warships entered contested waters off the Malaysian coast, sharpening the tensions between China and the US, even as the world was locking down because of the Corona crisis. An Australian warship has joined the US navy on the 21st of April to support their surveillance, hereby sending a signal to China that the South China Sea is not for the taking. The maritime component BRI that China is envisioning is being blocked in these disputed waters, since the important shipping routes running through this area are still under Japanese, Australian and especially US control.

On June 29, the US Navy’s 7th fleet announced that its Arleigh Burke-class guided-missile destroyer, the USS Barry (DDG 52), conducted its own live drills in recent days, launching a missile in the South China Sea while conducting freedom of navigation operations in the Western Pacific. “The Arleigh Burke-class guided-missile destroyer USS Barry – DDG 53 launched a missile during a live-fire exercise and conducted combat information centre operations,” announced the US 7th fleet on its social media platforms last week. “[USS] Barry is underway conducting operations in support of security and stability in the Indo-Pacific,” it said, while neither are clearly on the maritime area’s horizon.

The Pentagon also believes China is pursuing a nuclear triad capability – the ability to launch weapons from the ground, air and sea – and may try to develop nuclear strength “commensurate with a great power”, Pentagon spokesman John Kirby said at a separate briefing on Tuesday.

Left unchecked, China’s nuclear arsenal could grow “commensurately with its regional ambitions”, he said, without offering specifics on the size of Beijing’s arsenal. 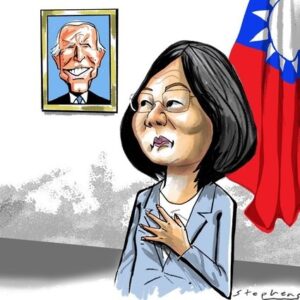 Taiwan Minister for Foreign Affairs States that Covid-19 has presented an interesting opportunity for the discussion of Taiwanese sovereignty. Their method of containing the virus has been widely praised by the international community. However, given their sovereignty disputes they have not been able to hold a place within WHO, to the dismay of many activists and intellectuals around the world.

Another significant consequence and a likely impactful risk of the COVID-19 crisis is rising antagonism towards Taiwan from China, as Tsai Ing-Wen last year increased Taiwan’s global diplomatic presence by donating millions of masks and other medical gear to the West.

Chinese officials are accusing Taiwan of “making reckless political manoeuvres” in participation in global organizations, and are threatening with various economic punishments, which could include restricted trade from the PRC. Such restrictions would cost greatly to Taiwan, as Mainland China is an imperative partner in trade.

It is therefore imperative that Taipei plays its geopolitical cards right. After strengthening their relationship with the US early in 2020 through the Taipei Act, signed by Donald Trump, Taiwan felt strengthened against what have been called “bullying tactics” by Beijing. 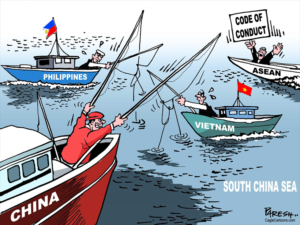 In 2020, Philippine president Rodrigo Duterte’s shockingly decided to unilaterally scrap the 1999 Visiting Forces Agreement (VFA) dominated conversations in and on the region. However, as the coronavirus pandemic tightened its grip on nations across the world, conventional wisdom would suggest that traditional security considerations will be pushed to the backburner for the foreseeable future. The president’s move on the VFA, the heart of the Philippine-US Mutual Defense Treaty, is primarily viewed through the lens of US-China competition.

Since the VFA provides the legal framework for rotational access and large-scale entry of American troops into the Philippines, its abrogation could render a century old alliance “practically useless.” Newly-minted Armed Forces of the Philippines (AFP) chief Gen. Felimon Santos Sr. warned earlier this year that up to half of the more than 300 annual joint military exercises between the two allies could end up on the chopping block. With the Pentagon imposing temporary suspension on overseas deployments amid the Covid-19 scare, hundreds of annual joint military exercises between the two allies’ exercises could be affected.

This long seemed an entry point for Chinese influence. For quite some time, promises of the BRI were considered to be a useful tool in solidifying China/Philippines relations, and as a venue for foreign investment urgently needed to boost Philippines trade opportunities. However, recently Covid-19 has damaged public perception of China in the Philippines, further straining the relationship. Moreover, in the South China Sea, the Philippines strengthens bonds with allies like Vietnam, pushing back against China in ongoing territorial disputes. 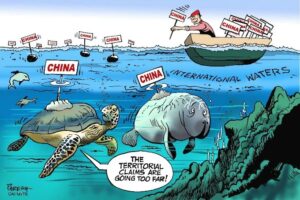 Vietnam last year held the chairs of 10-member Association of Southeast Asian Nations (ASEAN), which opens possibilities for agenda setting, resolution of disputes in the South China Sea and securing relationships with its neighbours. Vietnam planned to have a year packed with activities as the chair of the Association of Southeast Asian Nations (ASEAN) for 2020 and a non-permanent member of the United Nations Security Council (UNSC) for the 2020-2021 term. However, the Covid-19 pandemic has led to the cancellation or postponement of numerous events and summit meetings. While it is said that the outbreak has derailed Vietnam’s diplomatic ambitions, the door remains open for Hanoi to transfer its domestic success in fighting the disease into diplomatic achievements.

These many hats that Hanoi is wearing poses a complicated scenario. On the one hand, China is Vietnam’s biggest trading partner. Vietnam is also a stern supporter of the Belt and Road Initiative and maintains a definite pro-China stance on the One China Policy. On the other hand, Vietnam also has territorial disputes in the SCS alongside Taiwan and China. Recently, with China sinking a Vietnamese fishing vessel, tensions in the region have flared again. A particularly salient issue is coming to an agreement on the ASEAN’ Code of Conduct for behaviour of states in the South China Sea. Vietnam also advocates for greater unity and solidarity in the region, greater regional economic integration and a heightened sense of collective identity.

The United States also remains a crucial ally of Malaysia and has provided naval support against growing Chinese aggression and strong-arming in the SCS. The US remains Malaysia’s strongest security partner, enjoying extensive bilateral defence cooperation, and therefore maintaining strong diplomatic ties with the US is pivotal to Malaysia’s ongoing claims in the SCS region.

Meanwhile, tensions rise as Beijing currently conducts island building missions and oil drilling operations in the Spratly Islands; situated within the region Malaysia has laid claim to – the Paracel Islands. Tensions have only arisen further with Chinese militia and law enforcement ships approaching dangerously close to Malaysian oil and gas operations. Both the US and Australia have responded by condemning China’s “strong-arming behaviour” and by sending warships into Malaysia’s exclusive economic zone (EEZ) to provide domestic Malaysian security.

Earlier this month, Malaysian authorities said they have arrested a boatload of 202 people believed to be minority Muslim Rohingya refugees after their boat was found adrift Sunday morning near the northern resort island of Langkawi. Maritime officials have taken precautionary measures to prevent any possible transmission of the COVID-19 virus while handling the group. The refugees were taken to the maritime office for further investigation before they are handed to the immigration department.